I don’t usually post columns on books that I anticipate reading because I worry that it might have a negative influence on any reviews that may follow, but having read works by all five authors listed here, who have either had books released in either English or English translation in the US before, I think for once I can dismiss my general reluctance to promote and list the authors/books and briefly state why I’m looking forward to reading them (one I’ve already read):

Ever since reading a couple of Kincaid’s earlier books, including A Small Place and My Brother, I have been meaning to read more of her fiction, as she mixes character and place so superbly.  Have this scheduled to be downloaded to my iPad Tuesday morning.

I have read several of Gorodischer’s fictions, including Kalpa Imperial, Opus Dos, Bajo las jubeas en flor, Casta luna electrónica, and Menta (and I have a couple of others to read/review later this year), yet I’ve not read Trafalgar in Spanish due to the difficulty in finding an affordable edition, so I will be buying the English translation later this week and reading/reviewing sometime this month.  Her stories remind me favorably at times of Ursula Le Guin’s best and the wide range of tales that Gorodischer has told over nearly 50 years makes me curious about this translation of a 1977 collection.

Karen Lord, The Best of All Possible Worlds (February 12).

I have been looking forward to this one ever since I learned about its existence a couple of months ago.  Really enjoyed her debut novel, Redemption in Indigo.  That novel’s mixture of West African and Caribbean story motifs was very well-done and I am curious to see how her writing style will translate to an off-planet setting.

I’ve enjoyed Russell’s fictions ever since I read one of the stories included in this, her second collection, during my readings for BAF 4.  Her first collection, St. Lucy’s Home for Girls Raised by Wolves, I thought was an excellent debut collection and her first novel, 2011’s Swamplandia!, likewise showed promise.  Yet at this point in her career I prefer her short fictions to her novel and so my hopes are high that Vampires in the Lemon Grove will prove to be her strongest work to date.

I’ve already read Revenge and a mostly-positive (OK, I rarely write fully-positive reviews) review will be written in the next week or so.  It is a very good collection and the translation of this 1998 Japanese work was very good.  I also enjoyed her novel The Housekeeper and the Professor, which I highly recommend to most readers of this blog.

No, I am not referring to the bloated carcass of a series that should have been taken out back to be shot and then shot again for good measure, but rather George Saunders’ latest story collection, Tenth of December, which at the moment I type this is #5 on Amazon’s bestselling list.

I’ve been meaning to read Saunders for years now and when I heard that this collection was about to be released, I preordered it with one of my Christmas gift cards.  Just arrived an hour ago in iBooks.  Going to read it a bit before going to bed, then I’m going to write a review sometime Tuesday or Wednesday.  I fully expect to enjoy excellent prose and interesting narrative twists, with fascinating characters.

If anything, January 2013 (copyright-wise) has seen four books already come to my doorstep (or iPad).  In December, I received an early street release copy of yet another good book coming out on the 8th, Leah Stewart’s The History of Us (I’ve already read it and thought it was a very good book; review later this week).  In addition, just before Christmas I received Tamas Dubozy’s excellent story collection, Seige 13, after I preordered it based solely on Jeff VanderMeer’s glowing recommendation on Facebook (I believe he referred to it as the best original collection he had read in 2012).  Since the copyright is for 2013, I’ll count it as a 2013 release for reward purposes.  It too will be reviewed later this month.  Finally, I just started reading the Portuguese retro-futuristic anthology, Lisboa no Ano 2000, earlier today and a review of that promising work will be later this month (I believe it goes on sale this month; the 1st edition date was for January 2013).

Oh, and Jim Harrison is releasing an intriguing book combining two novellas, The River Swimmers.  I enjoyed his most recent poetry collection, so I’m looking forward to this as well.

So, for those of you browsing blogs and feeling like all some are talking about is the end of an epic fantasy series, here are some good alternatives for you to consider.

Sometimes, the end of the year sees the (re)issuing of interesting collections and novels.  Recently, I have received or been offered four e-book collections/novel and although I have to date have completed only one of them, each of these intrigues me enough that I wanted to bring these to your attention, especially if you have e-readers/tablets and don’t mind reading e-books (I believe most, if not all of these will see print editions in the near future).  Each of these have either been released since the first of the month or will be released by month’s end in a variety of e-formats.

Nir Yaniv, The Love Machine & Other Contraptions. (Infinity Plus).  Released in late November in both print and e-book editions, Israeli writer Nir Yaniv’s debut English-language collection, The Love Machine & Other Contraptions, has been translated by various writers, from Lavie Tidhar to Yaniv himself, into English.  The stories here cover a wide range of ground and as this is the only one of the books that I’ve read before writing this post, I can safely say that I enjoyed this one quite a bit.  Uncertain if I’ll be able to write a formal review before Christmas, but perhaps I’ll have more to say by New Year’s Eve or maybe early January 2013. 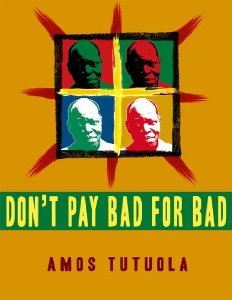 Amos Tutuola, Don’t Pay Bad for Bad. (Cheeky Frawg).  Released in early December in a variety of e-formats (Amazon, Wizard’s Tower Press), this is a collection of some of the late Nigerian writer Tutuola’s shorter fictions.  Will be reading this one later this week, as I’ve been meaning for ages to read his The Palm-Wine Drunkard and now I have no excuse to put off reading his work.  Review either late this month or in January.

K.J. Bishop, That Book your Mad Ancestor Wrote (self-published by Bishop).  Released so far only on Amazon US and UK, with a print format planned for next year, this is an intriguing collection that came on December 13.  I read and enjoyed Bishop’s The Etched City soon after its Prime Books edition was released several years ago, so I am very curious to see how a collection of her short fiction reads.  Hope to have an e-copy shortly, with reading to take place before Christmas and possible review by early January at the latest.

Leena Krohn, Tainaron (Cheeky Frawg).  Scheduled to be released very shortly (before month’s end, I believe) at the same places where Don’t Pay Bad for Bad is being sold, this is the e-book reprint of Krohn’s first short novel to be published in English translation.  I believe that in 2013 some more works by her and other Finnish writers will be released by Cheeky Frawg in an e-book anthology called It Came from the North:  A Finnish Fantasy Sampler and possibly another novel of hers.  I have an e-copy of Tainaron now for review purposes and will be reading it this weekend, likely for review in January if not before then.

Let me know which, if any, of these titles interest you the most and I’ll see about bumping up coverage a little bit.

I placed an order a couple of weeks ago when I saw it on Amazon, but it was oddly labeled as being in Serbian, yet with an English-language cover, so I ordered it more thinking that I’d have the original text to go with the Spanish translation (which I enjoyed quite a bit) than I would be having the English translation.  Well, it turns out that it is indeed a Belgrade-published English translation (no idea if there’ll be UK/US publication in the near future) and this is the blurb.  Tell me if this sounds interesting to you:

Have you ever wanted to own an atlas that would map out the relations between dreams and waking, between reality and imagination, between the past and the future?  Award winning writer Goran Petrović offers you precisely that in his authentic postmodernist style.  In their search for life’s meaning and happiness, the cast of characters, living in a house with the sky as its roof, spend their days connecting the threads of this life with the myriad threads of other worlds.  They offer us maps which show the paths through birth and death, love and romance, the thoroughfare between joy and despair.  By combining their tale with a collection of ancient and future documents dealing with amulets, map-making, legends and mythology, the author guides the reader through a fantastic labyrinth toward the rather astounding outcome of self-awareness.  This is an atlas that will make you dream and, even more, it will show you where your dreams may ultimately lead.  Some of the best qualities of Serbian postmodernist prose in Pavić’s manner can be found in this novel.

An Atlas Traced by the Sky is, paradoxically, a book which stylistically reminds us of many other books and authors (The Arabian Nights, The Decameron, Borges, Pavić, Ende), but which actually, in its rarity, in its baroque elegance and in the feast of imagination it contains, truly does not resemble a single one of those books or authors. – Mihajlo Pantić

I will review this translation before year’s end.  Unless the quality of the English translation is much poorer than that of the Spanish, I suspect it’ll have a place in my year-end summary of 2012 releases.

You are currently browsing the New Releases category at Vaguely Borgesian.